Over the last two weeks I’ve been running a script to download the auction snapshots for my old World of Warcraft realm Madoran as a follow up to my Explaining World of Warcraft Auction Snapshots post. Sadly I didn’t get nearly as much data as I wanted, so I’m starting the whole process over again in the hopes of getting a more consistent “chunk” of data. In the meantime I thought I would explain a few interesting things I’ve noticed about the snapshot data I did get, and explain why my collection method failed.

One of the early mistakes was my auction downloader script never accounted the wowapi library failing to get the auction data. When I was working on the library, I noticed that occasionally a request for an auction file would fail. To counteract that, the library attempts to download the file multiple times. If it still fails, it throws an exception. I, embarrassingly, didn’t account for my own exception so after three days my script crashed. I didn’t notice till five days later, cutting my available data in half.

My second mistake was not putting my download script under revision control. Apparently between starting my script the first time and the crash of 8/6, I made a change the altered the output I was saving. Once I restarted the script, it started saving snapshots with the new, different format. This made my parsing annoying as I had to detect what output the snapshot file was before I was able to parse it for metadata.

Finally, when I started parsing for metadata I didn’t account for anything but item id number when it came to per item metadata. This lead to my output showing Pet Cage as the most common item for almost every snapshot. While that was true, it missed out on some subtly in the data that I plan to fix for next time

Even with my script checking every five minutes for a new snapshot, it appeared like snapshots jumped from 11pm to 1am with no snapshot for the 12am hour. Maybe this is a artifact of my downloader script, but it might be that that they snapshot generator script on Blizzard’s side resets at midnight. This wasn’t consistent and only seemed to happen if a snapshot was supposed to be generated near midnight.

Of course, I had to at least graph something. Here is a graph of the total auction buyout value over a week. For each snapshot I simply summed the buyout values. You can see an interesting spike of data from the 14th through the 15th. Kind of expected since this was a Friday and Saturday. I would have expected Sunday to be up there as well. Something to look for once I get a at least two weeks worth of data. 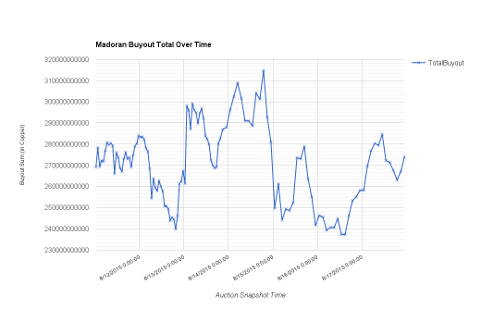